Skateboarding is an exceptionally fun sport you must try at some point if you haven’t. Being a skateboarder is like being a part of a new family. There’s a certain etiquette, history, and language that all skateboarders know, giving that feeling of being a member of a top echelon of happening folks in your society.

If you’re no alien to the world of skateboards but admirably watch guys showboat on their skateboards, moving uphill with so much ease while maintaining the wide grin on their faces, or you see someone zoom past you while you’re kicking hard trying to push through rough terrains. Ah, electric skateboards, they’re pretty damn awesome.

Electric skateboards are exceedingly attractive when it comes to high-speed traveling in style as you can pass by cyclists and passing pedestrians like they were standing still.

However, riding an electric skateboard isn’t like driving some new Albert Einstein-inspired technology; it is a skateboard with an electric motor and battery. These beast skateboards are growing in popularity and technology, and it is sometimes difficult choosing from a long list of available choices on the market.

The best electric skateboard for you depends on several factors, the most important of which is the kind of electric motor it runs on.

It is perhaps true that most people may not agonize or cause a headache over what kind of motor or drive their electric skateboards to operate on. What is the need?

Nonetheless, reading this article means that you are probably not like ‘most people, perhaps much better. On the other hand, if you belong to this bandwagon of people who think considerations like these aren’t really important, you might have to reconsider that as knowledge about these motors, their pros and cons, and how they operate in general can help you make a brilliant choice of what spec of an electric skateboard you want.

Learning about these motors is even more important if you are one of those passionate skateboarders that like to customize their boards. This is because for remodeling to be successful, you will need to know how every little piece of your electric skateboard works.

Regular electric skateboard users are probably tilted to a section of the divide and would stick out their necks for a particular type of electric motor or drive. However, if you are yet to take sides on what the best motors of skateboards are, this article is for you. Let’s look at what hub, belt and direct drive motors are. 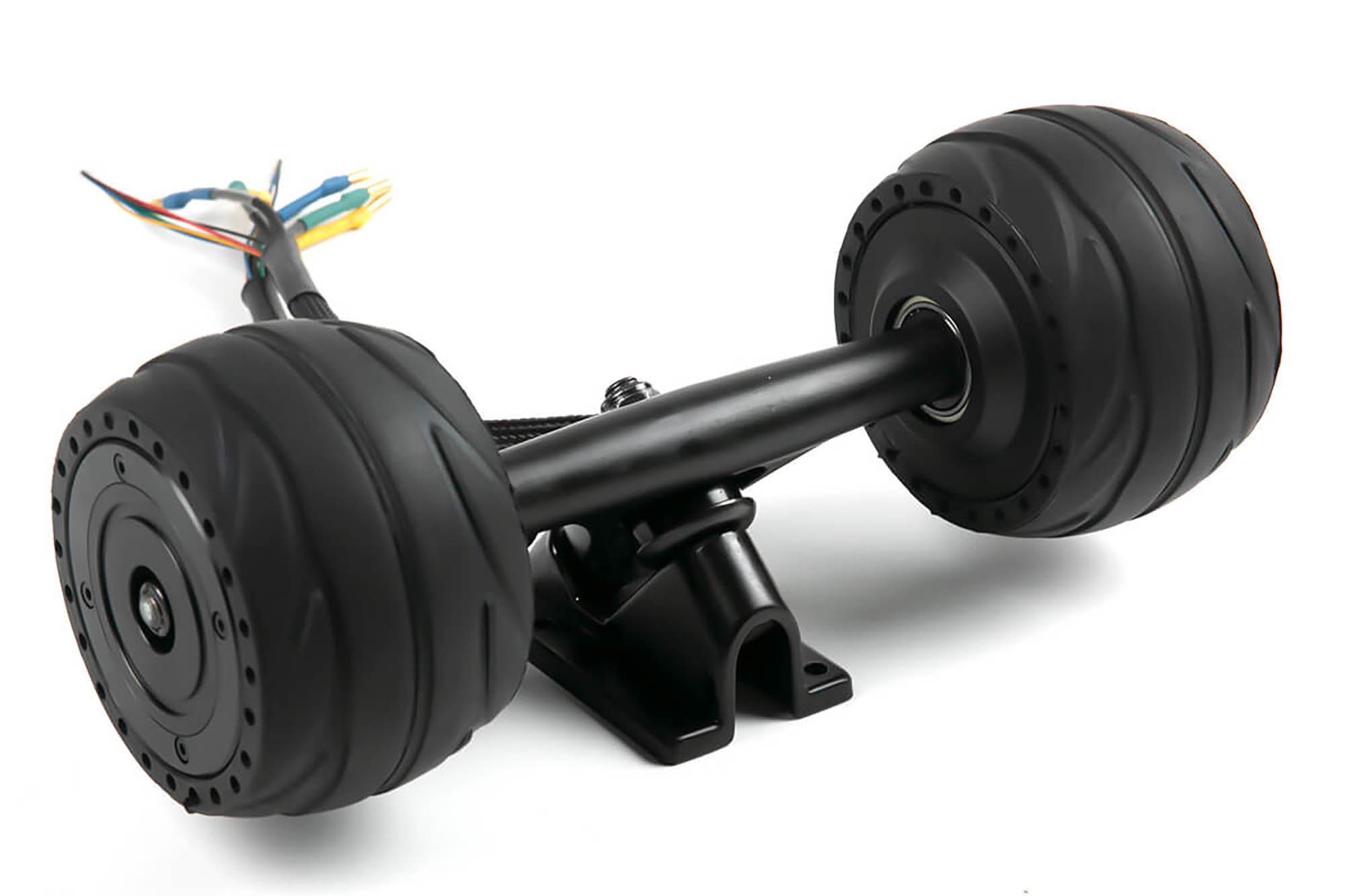 Hub motors can be found everywhere. There is no gainsaying that hub motors are a darling to the skate community because of their relatively less expensive parts and their clean and simple implementation. They are quiet, stealthy, and consequently, appeal to most people.

That said, they do not come without cons of their own. They have a poor shock absorption system making for reduced comfort during a ride. They also do not have as much braking or torque power at the same power input levels.

Added to that, Hub drive board types in general usually experience a higher failure rate than their belt drive counterparts, and this is not unrelated to the fact that they are exposed to a bigger magnitude of heat and shock as compared to other drives like the direct drive motor. 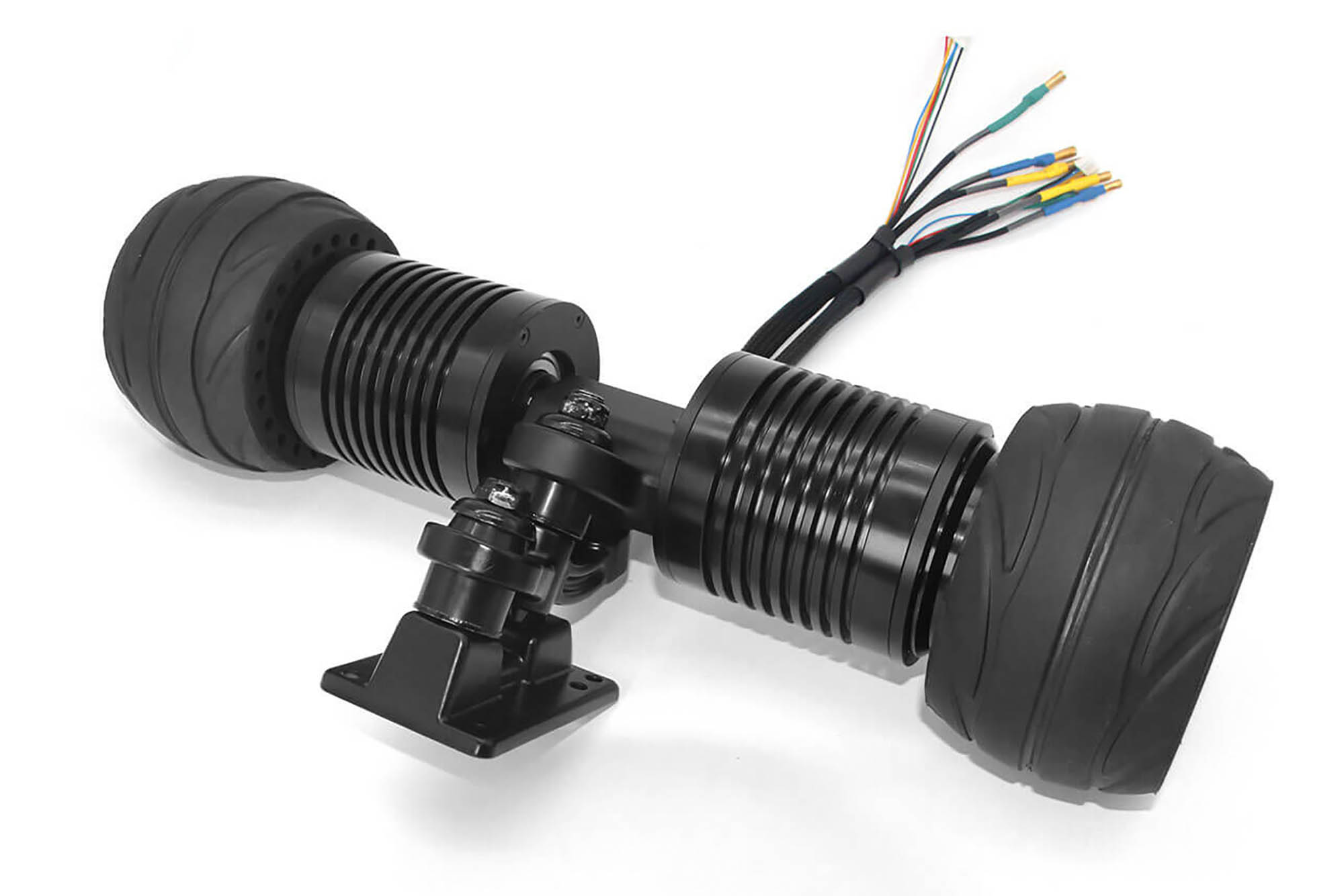 The direct drive train is one a lot of individuals are looking to jump on, however, there still exists a lot of misconceptions of what they are. Direct drives are systems where a full motor directly drives a full wheel.

In the past, hub drive and belt drive motors have all been marketed as direct drives, but they are quite a distance from how direct drives operate or what they are in essence. The only available direct drive system is that seen in the Carvon.

The Carvon direct drive is known for several advantages, some of which are:

Though the direct drive might seem like the dream electric skateboard motor and the best of the other two discussed above, it does have its disadvantages too. In a direct drive system, the motor isn’t shielded and sits right next to the wheel. Because its motor isn’t shielded, the ground clearance is affected, and the motor is most likely to be severely battered on bad roads.

Usually, it requires a lot of truck modifications and is not necessarily compatible with most setups.

They use a full wheel of urethane, unlike hub motors which employ the use of urethane sleeves. They are extremely heavy, and one of the major culprits is the steel axle.

In particular, the V2 Carvon Drive employs an 8mm axle (the usual standard of hub motor and belt drive trucks) that was prone to snapping.

On the other hand, the V4 drive uses a 12mm axle in its operation, circumventing the problem of snapping but adding a significant amount of weight to the overall system.

In general, the direct drive is still a new and unproven technology and cannot be recommended for use based on that premise. Added to it is that there are suspicions of a reduction in torque when used – the Carvons is a good example. Belt Drive motors are the most traditional drivetrain. They utilize an externally mounted motor with a gear-like pulley and belt to create a gear reduction on the motor before transferring power to the wheels as opposed to hub motors with the center of their wheels replaced by a motor. These motors drive some of the most used electric skateboards in the skate world, case in point is BOUNDMOTOR FLASH, Evolve, and Boosted. Indeed, most do-it-yourself e-board builders still use belt drives.

While most loyalists of the belt drives would use nothing other than what they are used to, neutral minds have a few concerns about them, one of which is the noise they produce. They also need regular maintenance and have the limited free-rolling ability.

Since the belt drives motor harbors a significant amount of resistance in its system - which makes it harder to kick-push – owing to the presence of pulleys, it is easy to see why they limit free rolling.

For skateboard users who aren’t mechanically inclined or have a thing for machines and how they operate, maintenance such as belt change due to wear and tear belt alignment and belt-tensioning could be a tough nut to crack.

Regardless, belt drives deliver better torque than hub drive motors even for the same price. They also give room for full longboard wheels as opposed to thin PU sleeves in Hub motors. This, in turn, allows for a wider selection of wheels to swap and choose from.

Added to that, if you like to get a bit more creative with your setup, employing the use of boosters and other tuning accessories, belt drive setups give you ample room for customization.

How to choose the most suitable motor

When choosing between motors for electric skateboards, it is important to know that there are no best overall motors. There are only suitable motors based on what you are in the market for – torque, speed, stealth, sensored, and so on.

That said, here’s a list of the most suitable motors based on several factors.

Torque – With torque, belt drives deliver the best torque compared to their counterparts in direct drives and hub motors. They also have better acceleration.

Custom – Belt drives are highly customizable since they are not restricted to wheel options. In fact, with belt drives you are allowed the freedom to use any type of longboard wheel – soft, hard, large, or small. How sweet! Although direct drives also have this same advantage as belt drives if not on an even better level, they are not a common motor type in the market.

Noise – The direct drives are the best hub motors and belt drives for noise. If you’re particular about the noise your skateboard makes when they zoom past a group of people, an e-board that runs on a direct drive might be your best bet.

Another factor worth mentioning when choosing your most suitable motor is whether it is a single or dual motor setup.

For the most part, this is an important factor to be considered if you’re building your e-board since most brand names make use of dual motor setups.

Here are a few things to note about these two motor setups. Single motors cost less than their dual counterparts. . Dual motors though more expensive have higher top speeds, faster acceleration, better braking, and overall general control. Perhaps most important of all is that they can handle more weight.

It is also important to take note of the motor power. If you’re driving through rough terrains, up the hills, and really difficult natural sites, you will need a motor with a high-power rating. The KV rating is RPM per Volt. When looking at motors, pick motors with a rating near 200kV. For example, our 6374 & 6384 motors have a rating of 170kV.

Motors are also known to have size and speed ratings written as four numbers alongside the name of the motor. Note that the higher the number, the greater the torque the motor will have. This means that a 6355 motor for example would outperform a 5055 motor.

With all being said, here are a few motor recommendations for you:

Riding an electric skateboard is the new black and a dream for every skateboard lover. E-boards are the new hype of town and are worth the hype because they give you the same skateboarding thrill, with lesser effort and more comfort.

With a non-electric skateboard pushing the strong foot against the ground is the norm. But all that is changing now with the promotion of these electric lovelies.

If you’re new to the world of skateboarding or the use of electric skateboards but willing to part with a huge chunk of money to get your dream skateboard, you must consider what type of motor it runs on. This is because it could well turn out to be a huge determinant of how you eventually see your e-board buy.

As discussed, the motors that these e-boards run on are mainly of three types namely belt drives, hub motors, and direct drives, and whichever you choose to work with depends on what you are most interested in or intrigued by in a skateboard.

If that is the case, you might need to start by determining what your absolute musts and must-not are to determine what electric skateboards fit well into your needs and requirements.

For example, if you are sure you do not want a noisy skateboard, you need not spend time researching belt-driven skateboards nor would you consider boards run by hub motors if you are particular about purchasing electric skateboards with high torque.

There are currently no comments. Why don't you kick things off?

Popular on the Store. 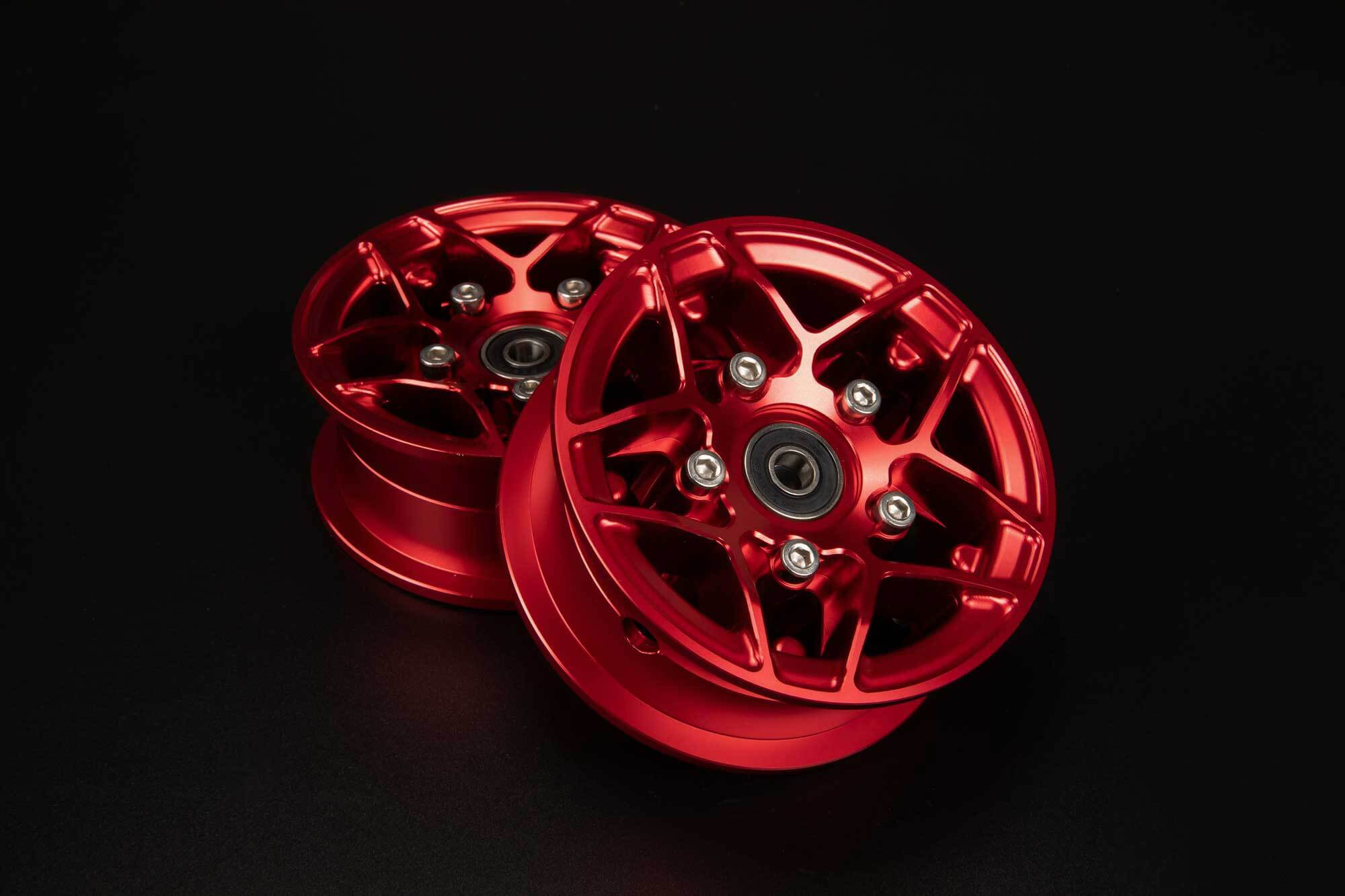 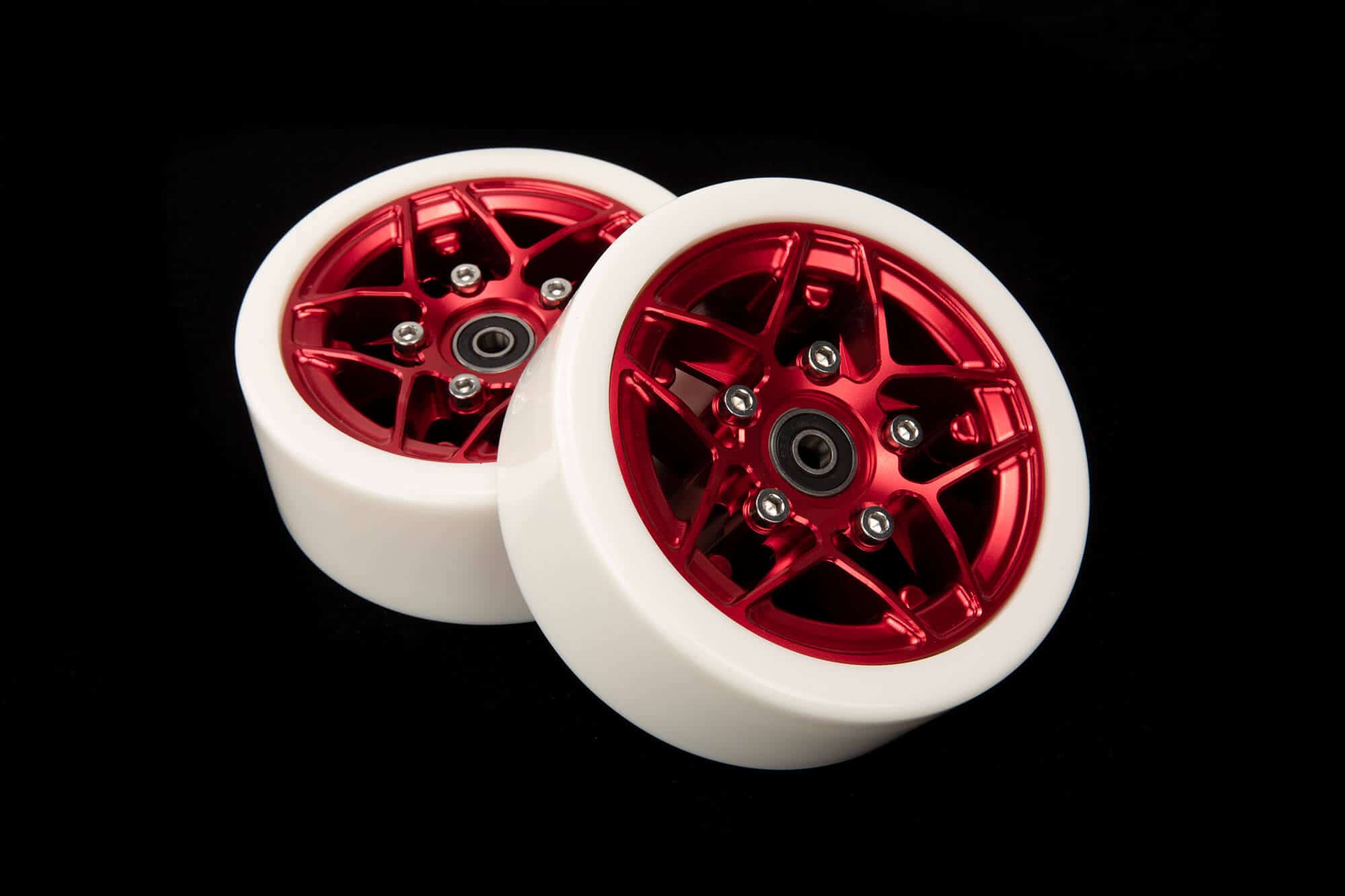 WheelsGet some extra wheels for your Electric Skateboards
Shop All Accessoires